​​
The Memorial will be located at Hampton’s Air Power Park on Mercury Boulevard (a major thoroughfare) and will be laid out with runways in the formation of Tuskegee Army Airfield where most of the Pilots were trained.

This Memorial is planned to be a destination point for tourists visiting Hampton, the Hampton Roads area and military personnel and their families who are relocating to anyone of the several military installations in the area. 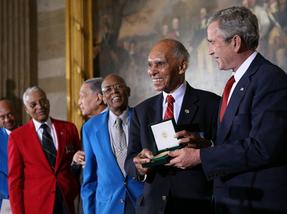 The city of Hampton has a long history of involvement in aviation. It was the home of NACA, the National Advisory Committee for Aeronautics, predecessor to NASA, and is the home to NASA Langley Research Center where the original astronauts trained. NASA LaRC continues to make great strides in aviation.

The first shipboard light took off from the USS Birmingham just off Hampton’s shore at Old Point Comfort. Hampton Institute (now Hampton University) was the site of one of six Civilian Pilot Training Programs that trained African-Americans to fly. The University operates an FAA-approved Air Traffic Control program and offers degree programs in Aviation Management and Flight Education.

Why a Tuskegee Airmen Memorial?

​
Our Word War II veterans are known as the “Greatest Generation.” They are mostly in their 90’s now, and, according to Veterans Administration figures, are dying at a rate of approximately 492 per day. It falls on those of us who remain to tell their story. We owe it to them and the Tide-water Chapter - Tuskegee Airmen, Inc. is proud to be leading the community effort to continue their legacy of excellence!

Like other African-American veterans, the Tuskegee Airmen fought a war on two fronts: abroad and at home. They helped win the war in Europe, and returned home to fight the war against racism.  They were among 16,000 to 19,000 men (and women) during WW II who  fought for the right to fight for their own country!

This Memorial will honor the Tuskegee Airmen with some well-deserved, hard earned and over due recognition.  Additionally, the Memorial will serve to continue to educate the public about their numerous accomplishments and sacrifices while providing a place for a moment of reflection.